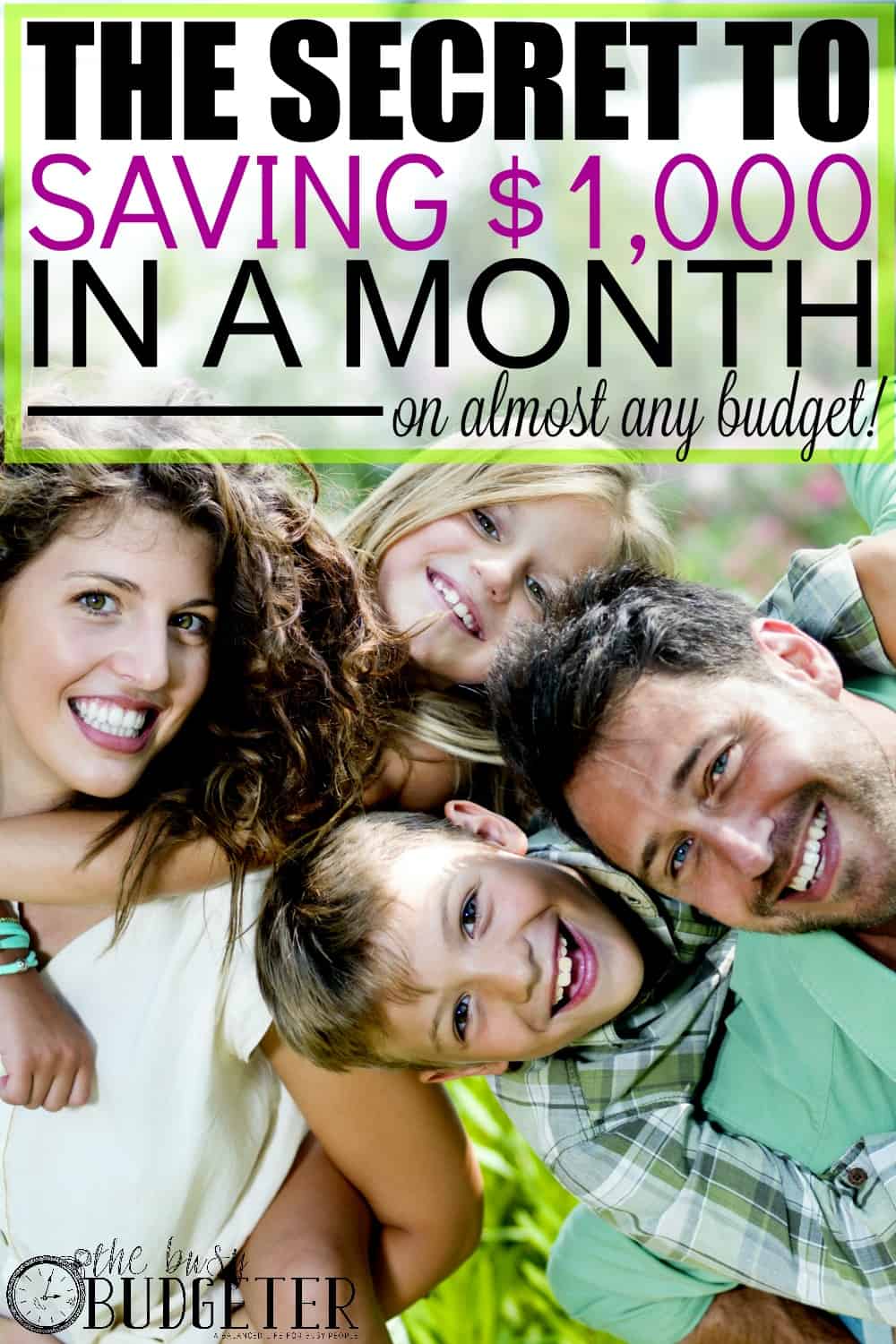 One of my favorite money saving tricks is using the spending freeze rules to save about $1,000 quickly. Usually, you can save $1,000 in less than a month. Depending on your current spending, saving $1,000 in two weeks isn’t unheard of.

What is a spending freeze?

A spending freeze is simply a commitment to not spend a single dime that isn’t necessary. You would cut out all unnecessary spending for a predetermined amount of time. Your bills would still get paid, and you would still make sure that your family is fed and medically taken care of, but no other spending is allowed.

What are the benefits to a spending freeze?

Even families that think they spend very little can usually save a lot of money in a short amount of time. It really resets the way you think about money.

Learning to make do with what you have and appreciate what not having money feels like, completely transforms your spending habits (and also makes you incredibly grateful). In fact, you can usually see the benefits of a spending freeze for several months in your budget with reduced spending.

What are the spending freeze rules?

We don’t have extra money at all. What’s the difference between not spending money and a spending freeze?

Great question! Even the people on the tightest budgets usually spend money on something that they don’t actually need. A spending freeze makes your commitment to not spending money an event. It’s easy to remember not to spend and it’s impossible to rationalize a purchase. Stick to the spending freeze rules and you can’t lose.

Even if you think you don’t spend money, I strongly suggest you try this for two weeks. I think you’ll save money anyway.

How much will this suck?

Likely a little bit, sometimes a lot.  But the benefits far outweigh the hassle.

The worst part is thinking up solutions to last minute problems or opportunities. The first one I did, I thought it would easy, it just meant saying “no” to buying things that I don’t need like lip gloss and spicy chicken summer rolls right?

What about your kid’s last minute field trip? When your best friend invites you out to eat and you haven’t seen them in forever? What about a crazy INSANE stock up sale at your favorite store? When you run out of paper towels?

These are all things you have to be committed to saying no to. Find a way to get what you want without spending a dime. Follow the spending freeze rules no matter what.

How to make sure you actually save the money.

As you go through the month, transfer the money that you would have spent to a hard to reach savings account so that you aren’t tempted to use it. The hardest part of this isn’t after the challenge is over (which is when most people think you’ll spend extra), but before the challenge begins.

We fear “missing out” and “not having enough”, and your instincts will say to stuff your freezer and your pantry to the brim to help you make it through this. Resist the urge! It defeats the point, and you can do this without that!

Seriously, tell everyone that you’re doing this. Our society is super weird about money. We all want to keep up with the Joneses and most of us would never tell a friend that we can’t afford something.

Yet, most of us are living in debt and with limited income. Which means that every time we say yes to drinks out and a popcorn the size of a toddler while watching the new sci-fi flick, we say no to what we really want.

The spending freeze gives you a reason to tell people that you’re saving money. When we did this for the first time, Jon was spending over $70/week on lunches out at work. We thought we had to budget that in, because all of the guys ate out together.

After the spending freeze, he got used to eating on his own, or going with them and not eating and then eating his own lunch later. In fact, he inspired a few others to bring their lunch in too. It’s been about 5 years now and we’ve saved over $10,000 from Jon bringing his own lunch into work.

Make a list of everything you want to buy when the freeze is done. A chipotle burrito bowl almost always tops my list. By the end of the month, you’ll have a ridiculously long list. I tell myself through the freeze, that the second the freeze is over, I’ll go right out and purchase everything on that list.

It’s the only way I can make it through the freeze.

But every single time, by the end of the spending freeze, I don’t even want any of those things anymore. Either I’d forgotten about them, found a substitution or just don’t feel as strongly about it. (I do usually get a burrito bowl though).

Clean out your pantry.

Plan ahead for your schedule but don’t plan ahead for purchases! You really want to make sure that you use up all of your pantry items and frozen items. If you take the time to clean out both of expired items,and organize as best you can, it will make this go so much easier. Make a list of what you have that can be used in meals and set yourself a very small budget weekly (about $30 is what we use for our family of 4) to fill in the food gaps if you need it.

How often should I do a spending freeze?

You can do them as often as you get benefits from them. We do them about twice a year. I would recommend them at least yearly and not more than once every three months (it takes a while for your spending to return to “normal” anyway, so you’ll likely see less spending for about three months.)

How long should a spending freeze last?

The most popular length of time is a month, I suggest that you do 2 weeks for you first few and then switch to a month. If you really struggle with a month, switch back to 2 weeks. We do them for two weeks and love them. A month is really hard for us.

How much extra can you save in a month?

A lot. I mean, a whole lot! Each family is different. In two weeks, we save about $500. In a month, we save over $1,000. We have a pretty strict budget without a lot of discretionary spending though, I’ve had readers save over $2,000 in just a month!

I also can’t say that I’ve done this, since I’m more about baby steps than extreme changes. But I had a reader save almost $3,000 in a month to fund an emergency savings account by taking “vacation” from day care, cancelling her internet and cable for the month, doing the spending freeze and solely eating out of her pantry and freezer (think cake and broccoli for breakfast).

While I don’t recommend this, I have to admire her drive.

Which of the spending freeze rules seems the hardest?