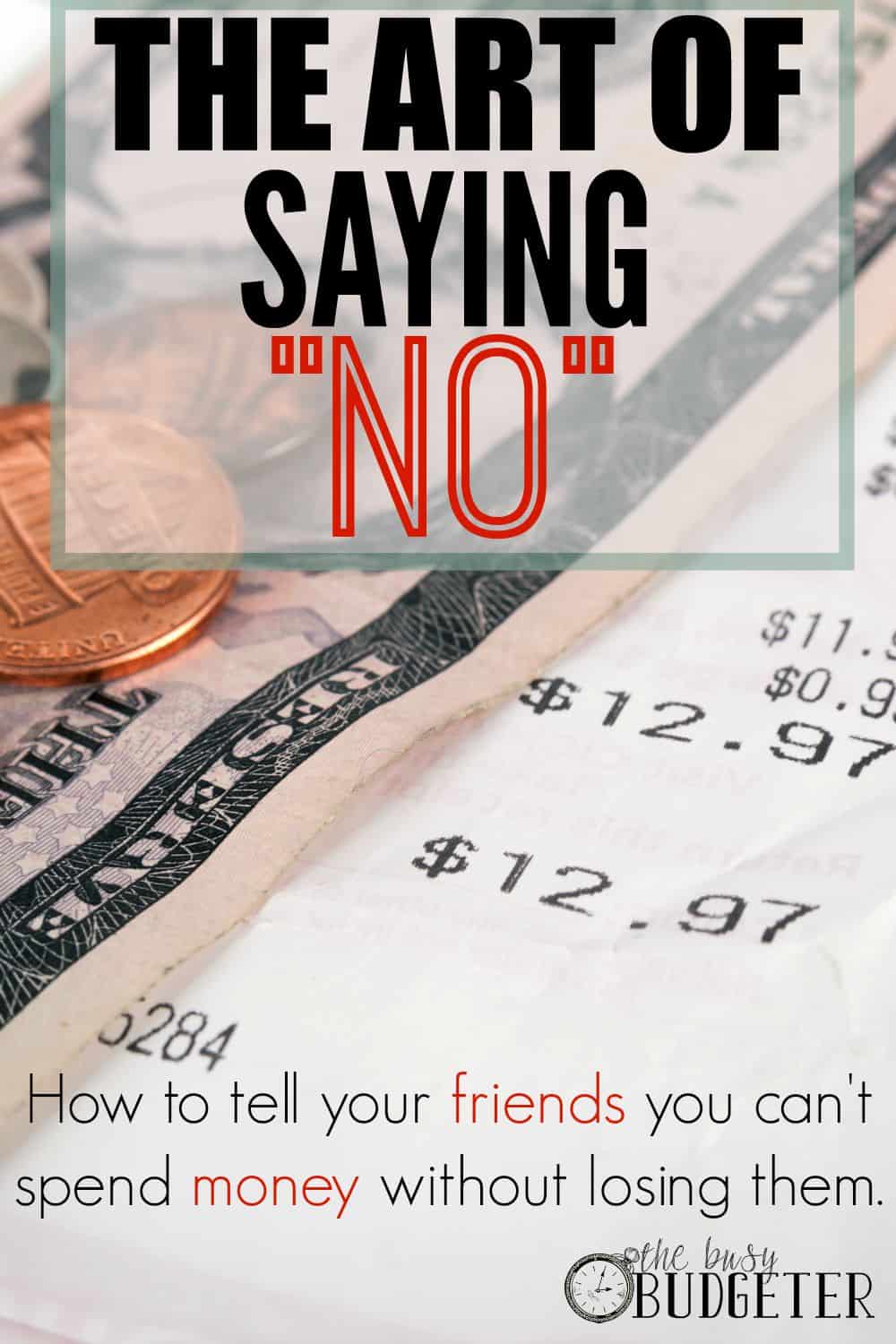 We reduced our spending by over $23,000, built up a savings, and I quit my job and started my own business. Do you know what the hardest part of all of that was? Learning to say “no”.

It wasn’t saying no to myself. I’m pretty good at that. It’s saying no to the people that I love that was the hardest.

I heard things like: “Want to grab Starbucks?”, “Ryan and I are going bowling, come with us!”, “Taylor Swift is coming next month! We have to get tickets!”, “Let’s grab lunch and discuss it”, and “Let’s go see Jurrasic World!”

None of these people meant to put me in a tough situation. In fact, they’re my best friends and family and I’d do anything for them and love spending time with them. The problem isn’t them, it’s me.

The truth is, I had the money available to do all of those things. But I had plans for that money. Plans that would mean more to me than seeing Taylor Swift in concert (Sorry Taylor- I still love you). Sometimes, in order to reach our larger goals… we have to sacrifice. I know that I will never reach those giant goals if I spend our money on the small things every week.

The problem is that I love these people, I don’t want to feel excluded, and I really wanted to spend time with them. It’s a tough situation to be in. I get that.

After about 5 years of juggling this, here’s what I’ve learned…

The art of saying no to friends when you need to save money:

1. Talk about your goals.

One of the most powerful things that I’ve seen in these last 5 years is telling people why you’re saving. Whether it be to live debt free, buy a house, take the kids to Disney World, or start a business; when people see what your goals are, they’re inspired to help you achieve them. It also turns “no” from “No, I don’t want to go to Starbucks with you” to “Oooh! I really want to but not enough to screw up my dream of Disney World next year!”

Fun bonus: Talking about your goals for budgeting will likely inspire a few other families to dream big as well.

2. They don’t want to spend money either.

Shockingly, the one thing I’ve seen over and over is that once I explain my goals and offer an alternative, most people are more excited about the free alternative. They didn’t want to spend money any more than we did, they just didn’t want to seem cheap. We never run out of fun things to do for free. In fact, I have a whole list of free things that we do with friends and family here.

Our standby’s are game nights where we put the kids to bed for a sleepover at a friend’s house (then just wake them up late at night when we want to go home), the petting zoo and family farm, and picnics at the park. Picnics are essential for almost all of these and help you say no to eating out.

3. They care about seeing you, not the bowling alley.

Your friends want to see you. They asked you to go bowling because they thought you might like it. Their goal was to hang out with you, not go bowling. Offer an alternative when you say no: “Bowling isn’t in the budget for me.”, “We’re saving up for a house, but if you’d rather go apple picking on Saturday count me in!” They’re going to jump on the opportunity to see you (and save money!).

Sometimes, it will be a situation where someone has plans to go with someone else and is inviting you along too. Stick to the same plan but suggest meeting up after so the person that invited you doesn’t feel like he has to change the plans of everyone else that had planned to go. Something like “Sounds like a blast! We’re saving up for a house now, so I’ll skip, but if you guys want to stop by on your way- I can send you with home-made chocolate chip cookies.”

That gives them the opportunity to decide if they want to skip to something cheaper, and your clearly showing that you’d love to see them, but no sweat if they can’t.

I’m not saying that you’ll never spend money on anything fun in your entire life, that would be nuts. If there’s something that you love to do and don’t want to stop, then just plan for it. Stick it in the budget.

We have an every other month pizza night planned with friends of ours where we go out to eat Pizza and ice cream with the kids. It’s something that we love doing and is worth the cost to us. It’s not that I think you should never spend money on anything, it’s that I want you to make well thought out decisions on what to spend money on.

By knowing that we want to do that and budgeting for it, it makes it easy to say “yes!”.

5. Have a no spend challenge.

I love no spend challenges! I’ve always done them for 2 weeks before, but we’re about to embark on our first one month long “no spend challenge” in October. This solved our toughest “just say no” situation.

My husband works in an office that eats out for lunch everyday. He often works in the field with his co-workers and they talk about the projects at lunch. He was spending $70/week eating out at lunches.

Prior to the no spend challenge, it seemed like that was something that we had to do. There was no way I was making him have the awkward, “I can’t eat out with you because I’m saving money” conversation with his boss and co-workers. We had a no spend challenge and he used that excuse to his coworkers for those two weeks, thinking he would just go back to eating out after.

In that two weeks, he got used to brown bagging it, and his coworkers got used to him skipping lunch (or eating in his car and just sitting with them). That was 4 years ago. He still bring his lunch to work now (he’s inspired others to do the same!) and has saved us… drum roll please… $8,320.00 in the last few years. Totally worth the awkward conversation!

No spend challenges have a way of making you “find a way” to get what you want/need without spending. I strongly suggest starting any financial makeover with one.

Learning the art of saying no makes it easier to navigate these situations in the beginning, but I would also caution to choose your friends wisely. I’ve never lost a friend over wanting to spend money, and by definition of the word friend, I don’t think I could. That being said, friendship doesn’t have a price tag and if someone thought your money goals weren’t important enough to make admission for, they probably aren’t someone you need in your life.

Have you ever spent money because you felt like you had to?