I’m so happy to be back! Baby boy (who we affectionately call squishy face, or squish for short) is almost 5 weeks. While life is far, far from normal, I can now see clearly that I will one day have a normal life again. No idea when, but Squish is pretty adorable and I can wait… I have time. 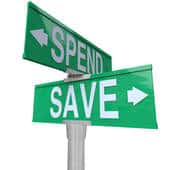 A long, long time ago (okay, a few months ago), I read a blog about a spending freeze for a year. Knowing that we would both fail if we tried a spending freeze for a year, I shortened it to a month. Prior to our spending freeze, I couldn’t get Jon into packing his lunch (or to be more exact, bringing and eating the lunch I packed for him). He had a “lunch budget”, but he would consistently go over ( not his fault- he has a medical addiction to Red Robin burgers) and create havoc on our budget.

I approached him with the idea of the spending freeze and explained it as a challenge. I did my homework before I even mentioned the idea. I used my USAA bank account to chronicle every bit of unplanned spending for two weeks. I included lunches into the unplanned spending. The total unplanned spending for that two week period was just over 509 dollars. Ouch. When I explained that the 509 dollars went to Starbucks (his), Chipotle (ours), Amazon (his), and Michael’s Crafts (mine- but that really shouldn’t count- it was an epic scrapbooking sale) he could see what I saw, that if we were handed 509.00 cash we would have chosen to spend it differently. It was our lack of fore thought and our inability to understand that the $7.00 we spent in coffee is $7.00 that isn’t available for the things we really value (like scrapbooking! – sorry, that wasn’t the point).

We set the spending freeze for a month and made the rule that there be NO unplanned spending. I had a list of bills that needed to be paid, and we had our 120/week grocery budget and nothing else could be bought. No matter how badly we wanted something, we had to wait until after the month was up before we bought it.

The best part of the challenge was that it broke us of bad habits without us even realizing it. Jon had always resisted taking his lunch because he worked closely with two other people and if they went out for lunch it was awkward for him not to eat. Because he had something to blame it on, he got used to taking his lunch and working around that. He saved money, calories and effective time at work. I learned that I don’t “need” things as badly as I thought I did. There were 3 or 4 purchases that I thought were “must haves” and considered making exceptions for several times. I sucked it up in honor of the challenge and I’m glad I did. It turns out that after the month was up I didn’t even buy them. Actually, I can’t even remember most of them.

After the challenge was done, we went back to spending money, but it was a lot easier to turn down the things that weren’t important to us (like going out to lunch)… Its been several months and we still haven’t gone back to eating lunches at work.

In the end, having the spending freeze really helped us kick start our budgeting goals and put us on the right track. I’m planning another spending freeze for November 1st through November 15th to keep us on track. We’re going to put any money saved into our Roth IRA (I know, boring right? Jon wouldn’t let me use it to buy shoes though.)