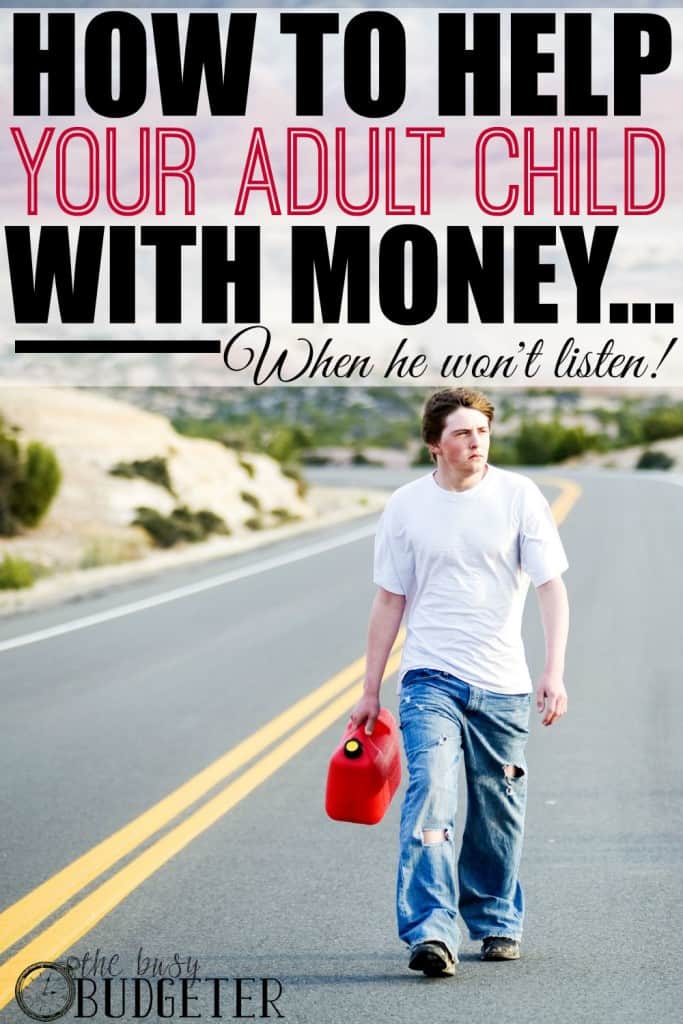 Parenting is the hardest job you’ve ever had. I get it. But now your kids are all grown up and you should be reaping the rewards of your labor with a deep friendship, right? Ha. Not quite yet. When has parenting ever been that easy?

You will get to that deep friendship, but you’ll need to work through this hurdle first. The “new to adulthood” stage is the hardest time to be a parent if you have a child who is struggling with responsibility.

Does your young adult child have trouble with credit cards? Spending money? Asking you for money constantly? Having trouble with his grades? Holding down a job? Taking his future seriously?

I’m in a unique place to tell you how to fix this, because this was me. I was the adult child who was clueless about money and so were most of my friends. I got through it and completely turned my life around.  Since then, I’ve been helping moms like you navigate the (very treacherous waters) of helping your adult kids bloom.

There are TONS of resources on raising money smart kids, but you don’t have a kid anymore. Giving him a piggy bank won’t help, you have a grown up (at least legally). Your approach needs to be completely different because the time to raise money smart kids was between the ages of 7 and 14. If we’re beyond those ages, we need to teach through support not control.

There’s a big difference, but I’ll walk you through it step by step.

Helping Your Adult Child with Money in 5 Steps.

The very first thing you need to do is the toughest. Stop helping him financially.

Stop sending him money, stop letting him have your credit cards for emergencies, and stop treating him like a child.

Unless you own yachts and vacation homes, let him know that you guys are concerned about the cost of retirement and need to buckle down your finances. One of the best things you can do for your grown children is to let them know that you don’t have it all figured out either. You may be ahead of them, but you had to learn from the school of hard knocks too.

If he’s already in school, let him stay- that’s a commitment that you’ve already made. If he’s having a lot of trouble with grades and you don’t see him applying himself, let him know that he’ll need to get loans for next semester because you’re concerned about spending that amount of money for something that won’t pay off.

You’re with him, not against him. Don’t lecture or get angry. Acknowledge or even agree with his feelings.

“You’re so right! Credit card companies are awful. I can’t believe they charged you $35 for a late fee! That’s so unfair!” Yes, of course it’s actually his fault for not paying his bills on time. But he doesn’t need a lecture from you, lectures won’t change his opinion of the situation.

You can talk at him for the next 5 years without understanding him or you can make him feel loved while he figures this stuff out. It’s you and him against the “system”. This allows him to feel comfortable to ask you for advice later on, when he gets to that point.

There’s a generation gap between you- He thinks you’re old and couldn’t possibly understand the way the world works right now. He’s (a little bit) right. The world was different when you were a teen, find ways to show him the similarities. You want to relate to him and show him that you understand.

Fear is what causes people to change. It’s incredibly difficult to change when you are comfortable with where you are. I’m going to be kind of blunt here: if you continue giving him money, watching him make poor choices and continue supporting him, you aren’t helping. He will still fail.

At some point, you will be unable to help him: if all goes as you hope, he will outlive you. There is no way to help him enough to fix this for him. Even if you leave him a huge inheritance, without the life skills needed to manage it, he will fail.  He has to fail before he can succeed.

He needs to have his cable shut off because he can’t pay the bill, his credit card declined in front of friends because he went over the limit. Something has to happen that makes him determined to never be in that position again.  It’s going to be awful to watch, absolutely awful and my heart goes out to you. But you’ll get through it and so will he.

You want this spectacular failure to happen when he’s 20, not when he’s 50. There is nothing sadder than a person with children of his own who learns those lessons with the added responsibility of caring for a family. When you fail like this when you’re 20, it can be cleaned up by the time he’s 27 (earlier with hard work).

When you fail like this when you’re 50… it’s so much harder to come back from. The best thing you can do is to hope for that spectacular failure fast and get into a position for the next phase.

5. Be ready to give advice or to celebrate small wins:

This is it. This is your moment to shine. The failure happened, he had the fear, now he starts his journey to success. As you spend time together, he may mention small wins.

Putting $20 into a savings account, finding a cheaper cell phone plan, deciding not to use his credit card. Jump on that Mom! “You’re so smart with money!” “Great idea!” “What company is it? Your dad and I should really see if we can reduce our bills too”.

Let him start to feel like a success. Let him know that you value his opinion. Don’t comment on his past failures, but comment often on his successes.

You’re his friend now, not his teacher. He did this on his own, let him share it with you. Never give unsolicited advice, it immediately invalidates it. Build trust in the relationship first and he will ask you for advice. Over time, you’ll get to the point where you share money tips as genuine friends, but not this early.

If he asks how you feel about credit cards, you don’t have to lie. But if he’s telling you that he just negotiated a lower interest rate (a small win for him), don’t beat him over the head telling him about the evils of credit cards. The time for you to impart that wisdom onto him was when he was 12.

He’s too old to be impressionable to you anymore and he’ll likely disregard your advice. Celebrate the small win and wait for the opening of when he trusts your opinion enough to listen to your opinion on credit cards.

What if we aren’t just talking money? What if he’s getting arrested, can’t hold a job or is drinking too much?

This is going to be even harder emotionally for you, but is just as important. Hands off until he starts to help himself.

I’m a former State Trooper of 9 years. If your child is arrested for DUI/DWI, it’s heart breaking. It can also be the best thing that ever happened to him.

He’s going to have to pay an immense amount of money, be judged for an incredibly long time and will feel the effects of this for his whole life. But an arrest is not the thing that you should fear. Dying in an alcohol related car crash or killing someone else is.

This will be an expensive lesson, but if done right, it can ensure that he learns this lesson now, when he has time to recover. Let him fail spectacularly and learn to succeed.

You have an adult now. You can’t force him to apply himself, hold down a job or control his drinking. He will either do this on his own or he won’t. He needs to fear the future of the path he’s on in order to change. He won’t do that if you help him constantly. Love him and support him, but don’t enable him.

I can’t be that mean to him. Isn’t there something else I can do?

Yup! I’m a helicopter parent by heart. This isn’t natural for me either. I’m 100% dedicated to this system based on my experience, my friends experiences and helping countless readers.

If I haven’t seen it work so often (and seen the results of not doing it), I don’t think I could do it. So, if you aren’t there yet… try to look for ways that you can step back and not be as involved but still be a safety net. Don’t consider yourself the “Bank of Mom and Dad”, but if he can’t pay his cell phone bill, get him a pre-paid phone.

Consider bargaining, “I’ll pay for your groceries every week that you attend Dave Ramsey’s Financial Peace University with me”. Celebrate those small wins whenever you see them and minimize your comments on the fails.

Truthfully? You’re delaying the inevitable; he’ll still fail. But if there’s absolutely no way you can be hands off, then trying something is better than continuing to enable him.

Your role is changing.

The greatest achievement you can have as a parent is to raise children that succeed in life, in whatever way they consider success. He’s going to spend the rest of his life learning and growing and meeting his new definition of success. Your role is changing.

You’ll still be the most important woman in his life (until he gets married at least!), but you no longer have control over him. You can start to sit back and celebrate who he is as a person. Be a friend, a mentor if he chooses and always a supporter.

You can do this. I can help.

Was there a point in life where you were a failure with money that you overcame?