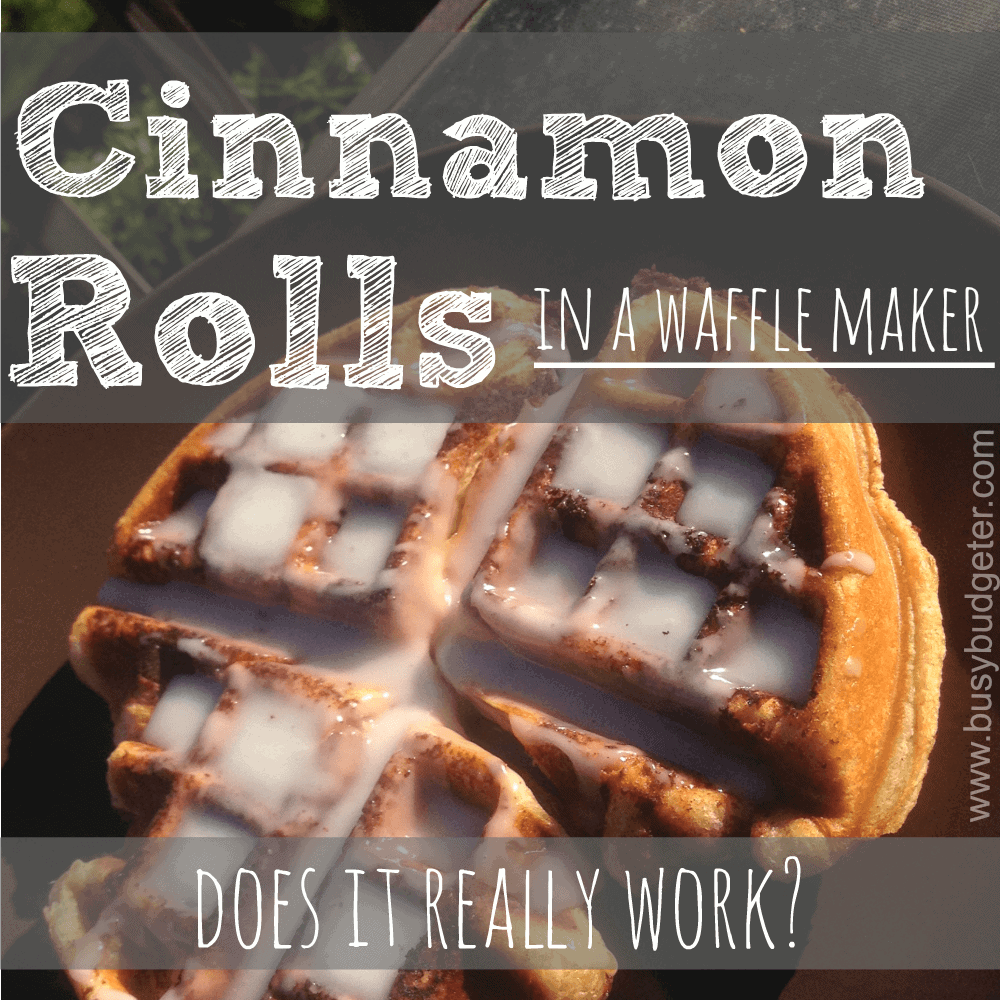 Have you seen the viral pin going around about making cinnamon buns in your waffle iron? I instantly fell in love. Cinnamon rolls in a waffle maker in 5 minutes? You can sign me up for that.

Every Wednesday, we take an idea that we’ve seen around the web and give it a try. This has been a huge help to me, because instead of pinning great ideas and then forgetting about them, I get to find out new ways to do things, saving time, money or sometimes both. We analyze the time, effort and cost, and decide whether it was worth it or not. If you want to cut to the chase, just look at the last paragraph to determine if it was worth it.

This week we’re doing exactly that; testing out waffle iron cinnamon buns to see if they save you time and are really as delicious as they look.

The idea behind the viral pin is simple. Grab some refrigerated tube cinnamon rolls and stick them right onto your waffle iron, close it up and in a few minutes you have delicious cinnamon bun waffles that you can cover with gooey frosting. I won’t lie, this blew my mind. I wanted this to work SO BAD.

I bought Wegmans brand cinnamon buns in a refrigerated tube roll. I set up our Cook’s Belgian Waffle Iron that rotates, and followed the directions. I put the buns in the iron, on a low setting, closed and flipped. I waited the 2 minutes and took the “waffle-bun” out.

The waffle was pretty dark, a little dry and stuck to the iron. I tried again on the lowest setting and this one came out better. It didn’t burn, and didn’t stick. The instructions say to cook one cinnamon bun at a time for two minutes each. Well, for 8 cinnamon buns that’s 16 minutes; which seems a lot to be sitting at a waffle iron cooking. At least when I bake them in the oven I can stick them in and do something else for 30 minutes.

Naturally, being the time efficient girl that I am, I tried two at a time. As soon as I closed the top, I felt the handle of the waffle iron break off. Son of a biscuit; I loved that waffle iron. The waffles were just too thick for the iron to close. I wasn’t particularly rough with it, but you may be able to escape this fate by “smooshing” your waffles first or closing the waffle iron really slowly so the bun gets softer and easier to handle with the heat of the iron.

I was pretty bummed about the iron, since I’ve had it for years and Jon got it for me during our very first Ingham family mystery gift challenge. But I only had eyes for my cinnamon bun waffles. I took that first glorious bite… and almost cried. In all of my hype, I never thought of the fact that the reason I like cinnamon rolls is the gooey doughy centers, not the crispy outer ring of bun.

This method makes the entire roll crispy and not gooey in the slightest (even drenched in icing, which of course I did). They tasted… OK. If you love that outer ring of crispy cinnamon roll dough, then you might love these. I would have preferred just a waffle, or an actual cinnamon roll.

Are cinnamon rolls in a waffle maker worth it?

But if you’re an absolute die hard fan of the crispy outer ring of a cinnamon bun then you should try this one if you live alone or only plan on making two at a time. Maybe using a iron made of cast iron would prevent breakage?

But lets break it down:

It took 16 minutes of constant attention to make a package of these cinnamon rolls; not to mention the 10 minutes it took to clean up the books that my two year old threw down the staircase while I was flipping waffles. A regular package of cinnamon buns baked as directed would take 22 minutes, but lets call it 30 and add the time to preheat the oven. I would much rather take the 30 minutes and be free to go about the house and get other things done. So, this didn’t save me time.

This didn’t save me money since the package was used either way. There was no cost difference between the two.

Have you tried this before? What was your experience? Anyone have a lead on a great waffle iron for less than $25?

This post may contain affiliate links. Purchasing a product using that link will not change your purchase price, but I may be paid a percentage of your purchase for referring you to the product. I never refer products that I wouldn’t use myself or don’t love. 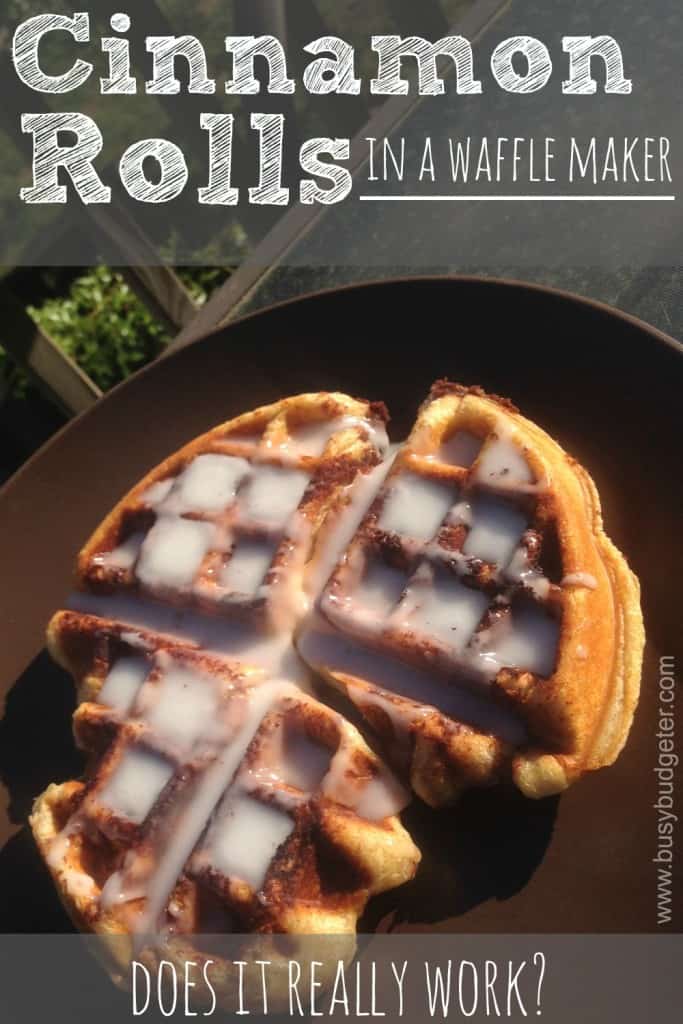 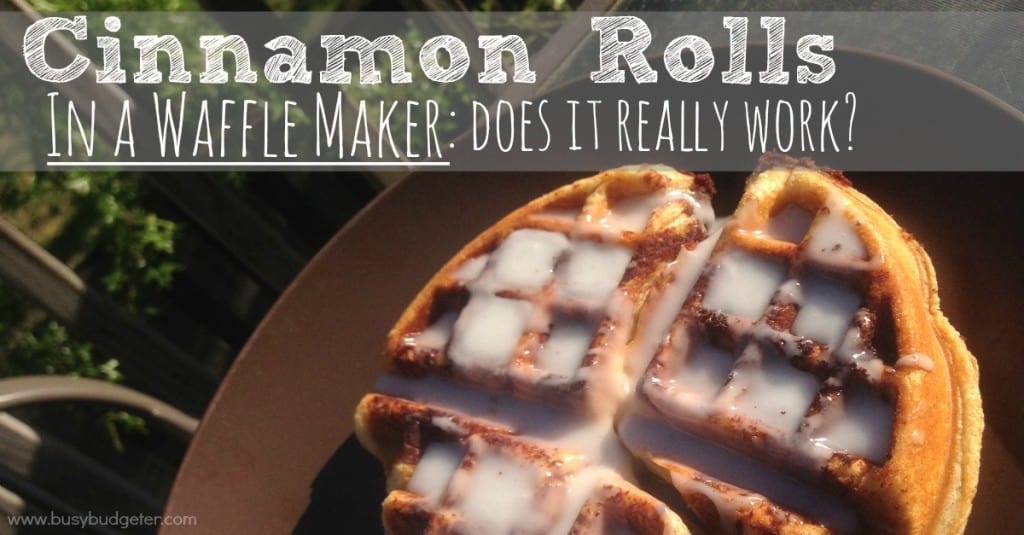